Tell Us How We're Doing At Serving You !

On Fri. August 31st, 2018 at approx. 1830hrs, Asst. Fire Chief Williams and Fire Chief Shanberger made the decision to alert manpower to the station in lieu of the storms and the copious amounts of rain that had already fallen as well as the additional that was forecasted. Department members and command staff were receiving multiple tips and phone calls that there were several roadways that were starting to flood, roadways there were impassible due to mud/land slides and natural waterways that were cresting their banks. At that time, Chief Shanberger and F.P. Capt. Marsteller proceeded to investigate the 1st due and assess storm damage in their privately owned vehicles while F.P. 2nd Lt. Marsteller established an EMA command at the Fawn Twp. municipal bldg. Firefighters Blevins and Amberman were instructed by Asst. Chief Williams to take the Brush truck and start towards the Woodbine area of our territory. Asst. Chief Williams and Sgt. Flahart took the Utility and started towards the Muddy Creek Forks area and F.P. Hutchins took the Fire Police service truck to Brown Rd. and then Deer at Bald Eagle to mitigate and asses flooded roadways and bridges that were submerged.  All command staff and units were operating on the CO. 56 channel and a game plan of getting out on the roadways to put up cones and barricades to re-route, block and deter traffic from historically prone hazard and flooding areas. After canvasing the area for approx. 2 hrs., units and personnel placed several barricades, signs and cones on roadways, closing them to thru-traffic and notifying the EMA command. EMA command notified York Co. DES which notified York City DPW and sent 3 trucks with plows on them to assist in clean up. Several roadways, drainage ditches and culverts were washed away, forcing F.D. personnel to close roads and notify Penn DOT. Units monitored conditions throughout the rest of the night and into the morning while also handling additional calls for service including a dispatched water rescue in the Woodbine area of the 1stdue. Thanks to a staffed firehouse, units got on the street quickly and were able to arrive within minutes, confirming that it was only a piece of unoccupied construction equipment. The CVFC would like to thank all of its members for their hard work and dedication as well as the public for being smart and not creating more emergencies than what there already were. The CVFC is proud to serve this community and is extremely happy that everyone was taking the “turn around, don’t drown” slogan very seriously !!

167 entries in the Call History

On Fri. August 31st, 2018 at approx. 1830hrs, Asst. Fire Chief Williams and Fire Chief Shanberger made the decision to alert manpower to the station in lieu of the storms and the copious amounts of rain that had already fallen as well as the additional that was forecasted. Department members and command staff were receiving multiple tips and phone calls that there were several roadways that were starting to flood, roadways there were impassible due to mud/land slides and natural waterways that w...

On Sat. evening May 5th at approx. 2212 hrs., the CVFC along with Eureka (Stewartstown) and Norrisville (Harford Co.) were alerted for a barn at 686 New Park Rd. Chief 56 was Johnny on the spot marking up and getting additional information in less than a minute of dispatch. York Co. 911 advised that they had one call from a passerby stating that they saw smoke coming from the barn at that location. Lt. 56 arrived on scene with about 2 min. of dispatch and advised he had a working fire in the bas...

With May quickly approaching, we wrapped up April with yet another 1st due house fire on the 17th that was luckily contained to the chimney along with some other calls for service including our Fire Police assisting Airville at Rt. 372 and Slab Rd. and some EMS calls.

On the morning of April 14th, just 2 weeks into the month, E 56-3 assisted Lanc. Co. Company's with the old rail road bridge/walking trail that had been burning for several days. We remained on scene for approx. 4-5 hours.

2nd week of April proves to keep us on our toes.

By the 2nd week of April on the 10th the company was alerted for a 1st due house fire on Brown Rd. Thankfully it was only a furnace malfunction and was quickly isolated. Within just a few hours, we were dispatched for a barn fire in Airville's 1st due but units were cancelled shortly after responding thanks to Co. 55's quick knock on what could have been a much larger incident.

Starting out busy within the 1st week !! 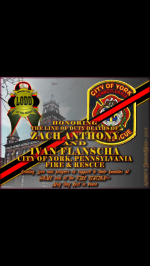 March served as an extremely busy month for the company. On Fri. the 2nd, we ran 9 calls in 7 hours. 1/3 of them were either structure or building fires. The station was lucky during the blizzard and never turned a wheel but was staffed for the 36 hour duration. As we wrapped up the month, we paid our respects to the York City Dept. of Fire/Rescue services for their LODD on Wed. the 28th by attending the memorial services. All toll, we ran 29 calls in a 31 day month.

Sta. 56 was dispatched for an AFA this evening in the 1st due. Brush 56 was out on drivers training and responded. Brush 56 quickly placed the box in service with a good intent call.

At 1525 hrs. on Sun. evening, Sta. 56 was dispatched mutual-aid to Co 7's 1st due for a working structure fire on the tanker task force assignment. Tanker 56 went enroute within 1 minute with a crew of 5. Ch. 56-1 assumed water supply officer and the remainder of the crew went to the roof and assumed truck company duties.

At 1644 hrs. Mon. evening, Sta. 56 was dispatched for a medical assist in the 1st Due. Units were cancelled enroute by Capt. 56

Just before 10:30 on Mon. night, Sta. 56 was dispatched to Owad Rd. and Bridgeton Rd. in the 56-05 box for an MVA w/ unknown injuries. Units arrived to find a single veh. that had hit a patch of ice, lost control, hit a tree and then drifted back across the roadway and up an embankment. Units remained on scene to assist with lighting and assist EMS. PSP was on scene and the vehicle was towed. Units cleared for service.

Sta. 56 was dispatched for a cardiac arrest. Units assisted EMS which transported the pt. to the hospital. Units cleared.

Sta. 56 was dispatched for an MVA w/ injuries at Bridgeton and Gamble Rd. in Fawn Twp. This is the 1st call that the new Eng. 56-2 made it's debut. Eng. 56-2 is a 2001 Pierce Quantum and was purchased from former Balt. Co. Boring VFC. It will now serve the CVFC as a certified rescue and mutual-aid engine. Crews arrived to find a single veh. up an embankment. PSP was on scene as well as EMS. Vehicle was removed and towed and units cleared.

Sta. 56 was dispatched to aid Co. 57 for a gas leak inside of a structure. Units were cancelled prior to responding.

Sta. 56 was dispatched for a vehicle fire in the 800 blk. of Fawn Grove Rd. Under command of Fire Chief Shanberger, units arrived to find 1 vehicle fully envolved. Crew from E 56-3 quickly extinguished the fire with only a few hundred gallons of water. Tanker 56 and Utility 56 were also on scene to assist with mop up. Fire Police Capt. Marsteller established traffic control until the vehicle was towed.

167 entries in the Call History

Copyright © 2006-2021. YourFirstDue Inc. All Rights Reserved. Designated trademarks and brands are the property of their respective owners. Content on this web site is supplied by Citizens Volunteer Fire Company. YourFirstDue Inc. cannot be held responsible or liable for any content, text, pictures, or any other media found on this web site. Maintained by the members and staff of Citizens Volunteer Fire Company.
Management Login
Powered by